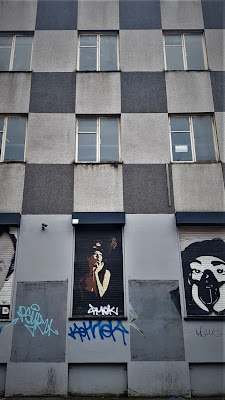 I've been feeling a bit out of inspiration this week. In Pennie Smith's book of photos of her time touring with The Clash in 1979 the band members provided captions- in one Joe Strummer wrote 'to have output, you gotta have input' and maybe that's the problem, not enough input recently. Tying that and some of this week's posts together (Unkle, David Axelrod, DJ Shadow) brings me to Futura 2000, the New York graffiti artist who provided words and artwork for The Clash. On their 1981 European tour he would paint the band's stage backdrop live behind them. Coincidentally I found this magical clip recently, Mick Jones playing guitar while Futura raps with Fab Five Freddie at the Bataclan in Paris, Mick looking every inch the hip hop/ punk rock star.

Futura did the lyric sheet on Combat Rock and the sleeve for This Is Radio Clash and was instrumental in kicking off the French graffiti and urban art scene. In the 1990s he hooked up with James Lavelle and alongside Ben Drury worked on the sleeve art for Mo' Wax and Unkle- his distinctive graffiti aliens adorned the front cover of Psyence Fiction and established a strong visual identity for the label. Mick has largely retired from music. Ten years ago he resurrected Big Audio Dynamite for a tour of the UK. I missed it due to being on holiday, something I still regret. Last year Mick came out of his retirement and appeared on The Avalanches multi- guest star album We Will Always Love You. The song We Go On was one of the highlights, a bouncy, optimistic piece of cosmic pop built around a Karen Carpenter sample and a rap from Cola Boyy- 'we go on/ hurting each other' Mick and Karen sing.

Mick's friend and Clash bandmate Joe Strummer died nearly two decades ago but previously unreleased recordings still surface. A solo best of called Assembly has just been released, remastered versions of the pick of his post- Clash work and featuring a 'new' solo acoustic recording of Joe singing Junco Partner, a song he sung throughout his adult life from The 101ers to The Clash, from Latino Rockabilly War to The Mescaleros. Junco Partner, a 50s New Orleans blues written by James Waynes for and about users and dealers, appears on Sandinista! in both reggae and dub versions and it's one of the handful of Clash songs that I'm a bit ambivalent about, I can take it or leave it.

This version though, just Joe, a guitar and some echo, shows the man in fine voice.

This is a better version isn't it?
I missed the BAD reunion gigs as well, because I assumed there'd be more. Oh well. Mick will come out and play very occasionally at one of the low key Strummer tribute nights held in a small club near the Westway, often sitting in with a local band and doing a few Clash numbers. He's earned the right to sit back but it's a bit of a shame he didn't keep Carbon Silicone going really.

Mick does what he pleases when he pleases. His spoken word accompaniment to the recent Flaming Lips prog album was, again, Mick just having a bit of fun. Great stuff.

I'd forgotten about that Flaming Lips album John, need to check it out.

I went to all seven nights of The Clash's Lyceum stand in 1981, over the course of which the huge white backdrop was fully graffitied up by Futura - I wonder what happened to that massive piece of art when the band rolled out of town. Futura stepped forward to perform this rap with The Clash every night, before climbing back onto the scaffolding to recommence his work.