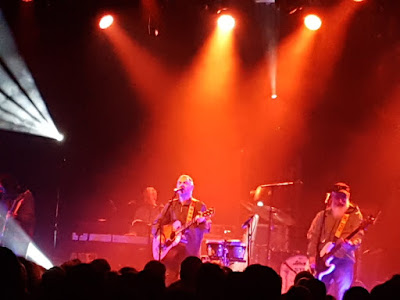 Steve Mason on Saturday night in a room at the university student's union that holds about 900 people and used to be known as the Main Debating Hall but is now more prosaically called Academy 2. Why he's playing to crowds of less than a thousand is a bit of mystery but it makes for a better gig, a packed room and everyone close enough to be involved. Steve's run of solo albums from Monkey Minds In The Devil's Time in 2013 to Meet The Humans in 2016 to this year's About The Light show a man at the top of his songwriting. His band, including Little Barrie on guitar, are spot on too, sounding much more like a band than a solo artist with hired players.

Steve comes on wearing a plastic cape and boiler suit, a sort of Milletts version of Vegas Elvis, and sets about the songs, all fully realised and vibrant. Planet Sizes from Meet The Humans is an early highlight followed by a run of songs from the new album, all sounding like they've been around for ages. Half way through the set they play Oh My Lord and everything steps up another notch, the keyboards, Steve's vocals, Barrie's guitar, driving and full on.

Political ire isn't far away- America Is Your Boyfriend is accusatory and on fire and he jokes between songs about the anarchist songs of Monkey Minds that didn't make him a millionaire. The more personal ones really connect, especially two towards the end of the set- Alive and Come To Me, both of which seem to be celebrations of survival and still being here, of overcoming the black dog of depression- 'When you hold me close as the night unfolds and I convince myself that we will grow old'. A few years ago this corner of the internet was often graced by a reader from Leeds who went under the name of DVD (Dick van Dyke), a man whose comments were frequently better written than the posts they accompanied. I always associate Come To Me with him and the times he was going through back then. If you're still out there Dickie and reading this, this one's for you.

The encore rocks and has the crowd dancing to the Magic Bus guitars and hand claps of Walking Away From Love and the brilliant Spanish Brigade. Words In My Head, the band all with their hoods up, sends us out into the cold night on a high.

Support act Edgar Jones plays an acoustic set beforehand, mainly new material, but he finishes with this song from his band The Stairs back in 1992- Weed Bus, a song that describes travelling across Liverpool on the 147 and being so stoned he misses his stop. Edgar spends Steve's set watching just behind where we're standing, as does Mani, the rogue Stone Rose. The last time I saw Mani he was on stage at the Etihad playing to 60, 000 fans.

Great review SA. I'm envious - I saw The Beta Band several times, but I'm yet to catch Steve in a solo capacity. Did he play 'All Come Down'? Still reduces me to floods every time I hear it.

Nope, he didn't Swede. I wnated Fight Them Back which he didn't play either but it seems churlish to grumble.

Sounds like a good night. Must check out his new album. Not been to the Academy in years, but 2 was always my favourite room (although they're not strictly in the same building if I remember rightly).

2005, I went to a lone pigeon gig in manchester in a basement somewhere near the town hall and steve mason turned up with mani. SM accompanied a lone lone pigeon on drums to an audience of about 40.