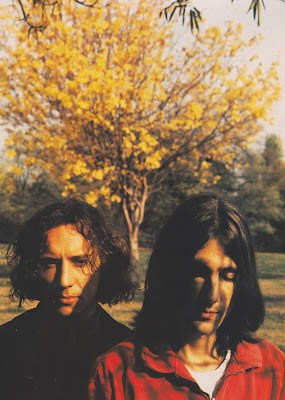 In 1990 The Beloved, converts to dance from indie, put out an album called Happiness that was wide-eyed and progressive, full of the spirit and technology of the time. It was followed by a sister album of remixes and versions and a new song which they hoped would take them into the charts but didn't (It's Alright Now), one of the period's lost records. Blissed Out had a different number of tracks depending on which format you shelled out for, eight on the vinyl, eleven on the cd and sixteen on cassette (hardly anyone I knew had a cd player in 1990 and not buying cds was almost an act of faith and resistance- how times change).

Jon Marsh Tweeted yesterday that the cassette version was now available to buy/stream at the usual online stores so those extra tracks previously found on the tape were now out there again officially. The pick of these are the two final ones- firstly, the Timeless Dub of Don't You Worry is a dub- house treat (remix credited to Adam and Eve, a remix pseudonym for Jon and his wife Helena). Seems wrong to post mp3s of these two songs when they were only re-released yesterday and you can buy the pair for less than £2 so videos only I'm afraid...

Secondly the track Acid Love (from 1988) a proper UK acid house tune with a hazy vocal, in thrall to the sounds coming out of Chicago and Detroit, Phuture and Pierre, and designed to send ripples up and down your spine.

And here is the album version of one of the peaks from Happinesss, a song about being in ove with being in love...

Your Love Takes Me Higher

The photo at the top of this post is from an interview with Jon and Steve in The Face, published in November 1990. If you want the full hit,  the interview and pages of the magazine are at Test Pressing.

Labels: the beloved, the face

The tape cover is the best too, would love it as a t-shirt.

Acid Love would sound right at home on the original Chicago Trax compilation. It is that authentic.
I have an ever growing Playlist of standout remixes called Epic Epoch and the contribution from The Beloved is Your Love Takes Me Higher - Chillum Willum Remix.

Two great tracks and Echorich as usual is not wrong, totally 1988 Chicago sound.