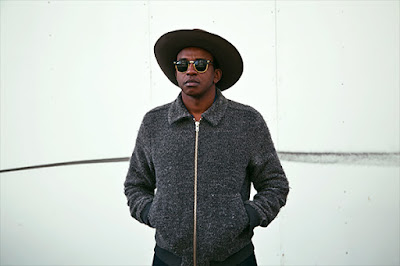 I was ploughing through a pile of cds behind the cd player in the kitchen, the spirit of Marie Kondo having entered this house while I was out at work. Most of them were either magazine freebies or mixes I'd burned myself, so inevitably some were keepers and some sent into the bin awaiting their place in landfill. I kept a Piccadilly Records 2017 sampler with an interesting looking tracklist and buried in the middle of it was this.

U'huh is by Sinkane (who made an e.p. back in 2015, four remixes of his songs by Peaking Lights, that was one of my favourite records of that year). Sinkane is Ahmed Gallab, a Sudanese- American, who combines Sudanese pop with whatever takes his fancy- dub, kraut, jazz, electronic music. U'huh is a joyful East African song with upbeat horns and a vocal saying that despite everything 'we're gonna be alright'. Watching the news currently I wish I shared his optimism.

This is from the Mean Dub e.p. which I highly recommend if you haven't got it, four of Sinkane's songs sent through the Peaking Lights dub blender.