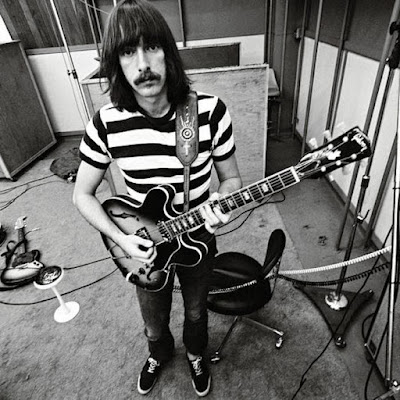 A couple of years ago I got into the habit of posting songs by The Velvet Underground on a Sunday and having put last year's 'lost' but recreated 1969 album on the turntable yesterday morning it seems like a wise thing to reprise. Also this picture of Sterling Morrison has been sitting on my hard drive waiting for an opportunity to be used. I can't think of anything that would make this picture any better.

One Of These Days sounds like Buddy Holly after a night on amphetamines and booze, frazzled and fragile but still sharp enough to play. It first saw the light of day in 1985 on the VU compilation, a record that probably influenced most indie guitar bands in the subsequent few years more than any other. This 2014 mix tweaked the twangy guitars a little and added the extra 20 seconds at the end, a freakadelic collision of guitars.

I've realised in the past decade that despite my love for John Cale during the early years of the Velvets, my favourite Velvets songs and period are the Doug Yule years. The much maligned Doug Yule who in 1972 Lou Reed wished dead. His contributions to the songs they recorded between 1968 and 1970, on guitar, bass, keyboards and vocals, are as much part of the sound of the group as anybody else- and Lou Reed never sounded as good again.
Posted by Swiss Adam at 08:00

Like you my favourite songs, well apart from Sister Ray come from this period and my top three from the VU album but the version of Lisa Says has to be the live one from the Matrix recordings.

A splendid tune and a bloody splendid shot of Sterling.