I Can't Get A Fraction 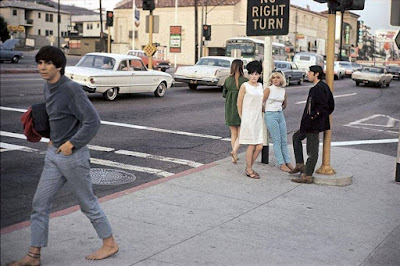 A short, sharp blast of garage rock for Wednesday (also proto-punk, acid rock and psych rock too I believe), from 1966, the year of maximum garage rock. Count Five were from San Jose and this two minute fifty-six seconds is all you need.

Wonderful fuzz guitar riff, stomping drum, harmonica, lyric about being rejected by a girl, double speed Yardbirds inspired rave up section. Really, it's got it all.

In 1983 The Cramps had left IRS and were recorded playing live at New York's Peppermint Lounge. Lux and Ivy put the recordings out as a mini album called Smell Of Female. There aren't that many live albums I'd pull out and play very often but Smell Of Female is one of them, six tracks of gloriously unhinged psychobilly, culminating in their cover of Count Five's Psychotic reaction. Over at Julian Cope's Head Heritage website there is a review of Smell Of Female that has Lux and Ivy as Loki and the Goddess and their music as the shamanic and barbarian spirit of rock 'n' roll. You should read it. It's here.

Both versions still sound great. As a big fan of '60s garage in the '80s I had a Count Five album (a reissue comp of tracks), just wish I still had it! There was a great psychy track on there called Merry Go Round. Also have a vague memory of hearing that original used for an advert not that long ago - can't remember what it was for or did I imagine it? But I suppose, for all that I don't like about that happening, it's testament to its strength as a song.
That review is so enthusiastic/excitable! I can't imagine what I would have thought of them had I heard them back in '79. Can't imagine either how there could ever be another Cramps-style band with the same authenticity.

It might have been on an advert, that sort of rings a bell. I heard it in the new Channel 4 drama/comedy Pure last week which is why I think it got on my mind and ended up here.