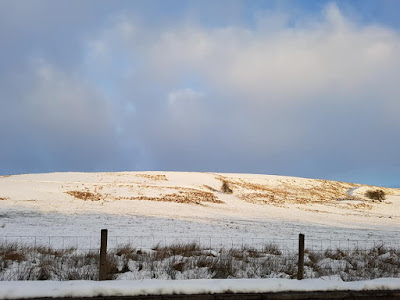 We've had fair old amount of snow this week. We woke on Wednesday to what for south Manchester is a good covering, a few centimetres, ungritted roads and an iffy journey to work. Work, up in east Lancashire, had its fair share too. Everything that was still on the ground then froze as the temperature barely got above zero all day. Yesterday we got more snow and driving home I stopped on the moors to photograph the Pennine hills that six months ago were on fire.

I've posted this before but it seems appropriate to post it again, a throbbing and wintry ride through the Scandinavian snow, by Stockholm's Paresse.

Hunters In The Snow

I'm going to see Steve Mason tonight, touring to promote his excellent new album About The Light. Back in the 90s his group The Beta Band made one of that decade's best songs, setting a standard that even they found it difficult to live up to. This song- slide acoustic guitars, Steve's doleful vocals, the shuffling rhythms and bass, the crescendo to the trumpets- is a beaut.