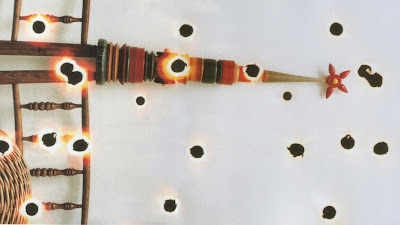 I sometimes think I enjoy Four Tet's remixes (like yesterday's one of Bicep) much more than his own work but listening to 2003's Rounds again recently I was struck by what a good album it is and how well it has aged. It does not sound sixteen years old- much of it could have been made yesterday. Rounds was built almost entirely out of a sample library built up over years but sounds organic as well as electronic and processed. The tracks on Rounds are non-linear (the clue's in the title I guess), often built on little circling parts and loops that build and repeat, stopping and starting, shifting slightly, dropping out of phase and then in again. Intricate and focused music based partly on hip hop, jazz and folk but sounding nothing like any of those styles. I could post any of the ten songs that make up Rounds- here's the opener (if you don't know it go and listen to the closing song Slow Jam too).

As a huge Fridge fan I was genuinely concerned that I might have heard the last of Kieran when the band split. Shows what I know.

Haven't listened to this album in ages, will need to dig it out. Had Beautiful Rewind on last week, that hit the spot.

That's a good shout Drew. Must go back to that.