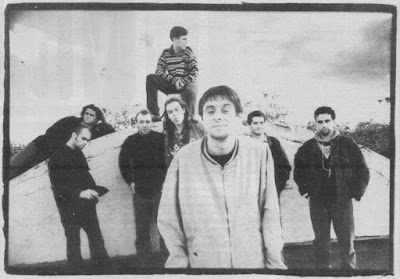 2019 is going to be a year of 30th celebrations marking three decades since various albums and singles were released that shaped popular music and culture. By 1989 things were starting to happen for Happy Mondays. Bummed, their masterpiece, came out in November 1988 and sold slowly but steadily. From it's Central Station Design cover to the nude on the inner sleeve, from Martin Hannett's echo and delay drenched production to Shaun William Ryder's stream-of-consciousness lyrics, Bummed looked and sounded like no other record (although plenty of other records would soon be released that were inspired by Bummed).

The penultimate song is Do It Better and at only two minutes twenty-nine seconds it's the shortest song on the album. Musically it is miles from late 80s indie, Mark Day playing chords that other guitarists wouldn't even consider and Paul Davis' tinny keyboard swirling around over some drums that sound like they were recorded in a different room through an open door. Over this unholy stew Shaun chants 'On one, in one, did one, do one, have one, in one, have one, come on' before letting loose with...

Do It Better was a live favourite, a monstrous, circling stomp. Thirty years ago today the group went into Maida Vale studios to record a session for John Peel, putting down versions of Do It Better, Mad Cyril and Tart Tart (broadcast a week later, 28th February 1989). For some reason, despite buying every Mondays single during this period I never bought the Peel Session and don't have an mp3 of it either. It's thirty seconds longer with Shaun's tambourine shaking away and the keyboards leading the groove. Double good.