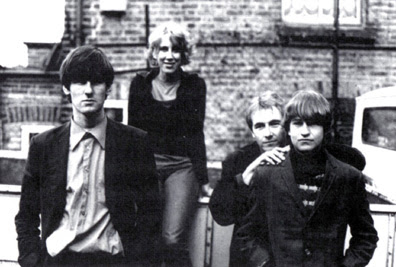 The Go-Betweens have been in the ether recently- the documentary has been on the TV and the recent album by Rolling Blackouts Coastal Fever has some songs that sound very like them, especially in the vocals. Checking my back pages here I was stunned to find out I've only posted anything by them twice and nothing since 2012 which seems really remiss of me.

The Go-Betweens made a handful of really good albums, records filled with unique and intuitive songs. I got into their 16 Lovers Lane album not long after it came out in 1988 and dug backwards from there. The compilation 1979-1990 was a must too, the first disc a Best Of and the second a round up of B-sides, early singles, radio sessions and lost songs, a real treasure trove. The group's founding members Robert Forster and Grant McLennan were inspired by Brisbane's nascent punk scene, The Velvet Underground, Bob Dylan and The Modern Lovers, heads full of poetry, and 60s and 70s films and both had something to say, Forster first and then Grant when he started writing songs too. They developed really distinct but complementary voices and the band that formed around them- first as a three piece with drummer Lindy Morrison and then later with Robert Vickers and Amanda Brown- filled out the twin acoustic guitars and made music to match the words. In places the words and the vocals are as good as anything anyone else was doing in the 1980s- the first line of the first verse of Man O' Sand To Girl O' Sea where Robert Forster growls 'I feel so sure about our love I'll write a song about us breaking up' comes from somewhere most singers weren't inhabiting.

Cattle And Cane was the first single off their Before Hollywood album, released in 1983. Sparse acoustic guitar and bass open the song, with a strange changing time signature throughout, music that seems both post-punk and traditional.  Grant sings about fields of cane and a house of tin and timber, evoking the open expanses of his Australian childhood, then being a teenager and losing his father's watch while at school, then as a young man. It's a song about home written thousand of miles away, in a run down flat belonging to Nick Cave during a miserable London winter, on Nick Cave's guitar, while he lay unconscious nearby. The backing vocals at the end are particularly gorgeous.

Cattle And Cane
Posted by Swiss Adam at 08:00

Hi Adam. I discovered the band about two years before you with the purchase of Liberty Belle and the Black Diamond Express. It all came about with a 20-second snippet of Spring Rain in Jonathan Demme's Something Wild. I bought the soundtrack but was gutted when the song (which was a complete mystery to me as to who it was) that I had been so attracted to was not on there. Luckily, there was an older and wiser clerk at the record store I went to back then who knew the film and directed me to the Go-Betweens. Like you, from there I made my way to the older material. I imagine I was first in line to buy 16 Lovers Lane while surrounded by the cornfields of rural Illinois. I have not seen the film you refer to yet but give the highest marks to Robert's book.

I always thought that 'Cattle & Cane' probably is their finest moment. Then again there are days when I think the same about 'Draining The Pool For You', mind you ...