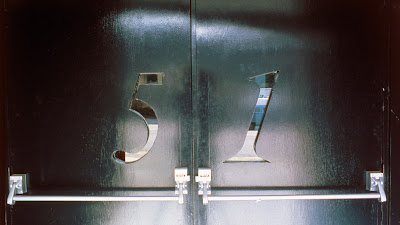 I'm fifty one years old today. Last year's birthday, the big five- oh, took place in lockdown and despite everything it was a good day- lockdown brought some freedoms with it in a way, do what you can under the circumstances. This year's birthday means we can actually go to a pub although our booking for tonight is for sitting outside, it still feels a bit soon to be going indoors.

Songs about being fifty- one are understandably thin on the ground. There aren't too many songs celebrating moving another year into your fifties. On Heartland in 1986 The The sang about the UK being the 51st state of the USA but that's not especially cheery for a birthday song. Instead here's Jimi Hendrix and his Experience in 1967 with a song about 51st anniversaries, the B-side to Purple Haze. Hendrix's guitar sings and swings, fuzzy and warm, switching between rhythm and lead or playing both at the same time, Noel and Mitch thudding away behind him. Jimi sings about the flipsides of marriage, a tale about not wanting to settle down, not wanting to be tied down- very much a young man's point of view. Jimi never lived to see his 51st birthday- he died four months after I was born, 18th September 1970.

All the best Adam, have a great day.

Kids of today, moaning about their age. Many happy returns.

A very happy birthday to you and enjoy your celebrations this evening.

Happy Birthday Adam and have a great one

All the best, Adam, have a good day.

Anniversarial best, keep on keepin on

Many happy returns of the day Adam!

From one old fart to another. Welcome to the club.

Happy birthday, Adam. Hope you had a great day all round.

Thanks everyone for all the birthday wishes in various languages and abbreviations, links to clips and all the rest. I love you all.

Welcome to 51, my friend. Roughly six months in I can assure you everything will be just fine. Hope you had a nice time out.

You have about 6 months on me. I disagree with pretty much all of your politics but I cannot fault your taste in music. Many happy returns and keep it up as long as you can!

Thank you. On Twitter this would lead to a furious and escalting exchange political exchange but this is music blogging so we'll accept we have different views but love the music.

Happy birthday, too late but still