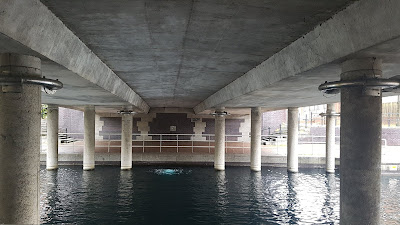 Releasing single songs or tracks semi- regularly onto the internet has become the new way of putting music out for many artists, especially those who occupy the long tail of the music industry- not a single as we'd recognise it from the glory days of the 7" of the 70s and 80s or the CD single even of the 90s but a drip- drip- drip of new music in easily digestible chunks. Bandcamp seems to offer artists a much better deal than the big streaming services and they have a one Friday a month offer that gives even better cut for the artist. Two of my recent favourites both unleashed new tracks into the ether last Friday, a pair of superb pieces of 21st century electronic music, built on the dance music of the past but with a half closed eye squinting at the future.

Duncan Gray has released umpteen tracks through his label Tici Taci, often the kind of chuggy, wonky monsters that made Andrew Weatherall and Sean Johnston's A Love From Outer Space travelling disco such a good night out. His latest offering is a bouncier, housier affair- May Your Toes Kiss The Sand Again is a sentiment we can all empathise with and the track is a joy, a Larry Heard inspired piece of uptempo Chicago house via Slough (or uptempo Slough house via Chicago, either way).

This is an older one, Deep Blue, a fuzz bass- led slice of dark acid disco from 2013.

Pye Corner Audio has been dropping, as I believe the young people say, a series of one off tracks since lockdown last year, mesmerising wobbly acid and sci fi house with button pushing names like Quarry Rave, Rotational Squelch, Memory Of Rave, Somewhere There's A Sunrise and Jupiter Orbit. The latest is Interplanetary Acid, five minutes of retro- futurism, synths and sequencers, that I can't get enough of. Get it here at a name your own price deal.

Duncan Gray is on a roll this year. 3 of 3!
My Toes Kissed The Sand this weekend (and my bake was more than kissed by the sun) but this was just the feel I went for as well. Wow the Larry Heard/Mr. FIngers/The It vibe is ALL over this!