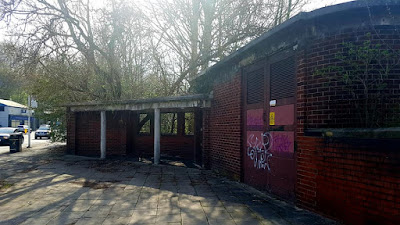 At the end of last week JC at The Vinyl Villain posted three songs by Cocteau Twins, the epically beautiful Pearly Dewdrops Drop and the two songs from the 12" single, The Spangle Maker and Pepper- Tree. By coincidence I'd recently pulled the band's 1990 album Heaven Or Las Vegas off the shelf, intending to give it a listen. The opening song, Cherry- coloured Funk, is a spellbinding and breath taking three minutes, a liquid, melting guitar riff played over the simplest of drum machine beats, a swirl of FX lying just behind. Liz Fraser's voice glides in on top, an otherworldly blur of words and then without warning a sudden soaring moment to a falsetto part that is . The guitar riff comes back again, round and round in its gently trippy, off kilter groove and Liz sings on- I've no idea what she's singing about and it really doesn't matter, the words are just part of the sound (I'm sure they meant something to Liz when she wrote them). The band was going through some churn at the time and there's a slight unease about the album, hints at the darkness of their personal lives- you can hear it Cherry- coloured Funk- but there's also an energy about the songs and the rush bands get when they're on a creative roll and on fire.

It took until this album to have any sort of success on this side of the Atlantic... and even then it peaked on Billboard at No. 99. We have a lot to account for over here, and this is certainly on the list.

There was a rather lovely version of this featured on an episode of the dark comedy Back To Life. https://youtu.be/NxnQWpN5prA

I love everything Cocteau Twins, and have always felt that the mixed critical reception for Heaven Or Las Vegas was just more music journo posturing, because it is a an album as stong and shiny as chromium steel. One of the best things about the album is out much space there is in the music and how elevated the production is without losing any of that Cocteau Twins magic. So if something as beautiful as this album is, managed to bring new fans to the band, what could possibly be wrong with that?

I agree SA, there are signs in the songs that things weren't all going as they might within the band, but the album goes from strength to strength for me, showing the commitment of all concerned.

I left one thing out - How much I wish that The Cure, with the Disintegration line up from the same era, had covered Pitch The Baby...

Ice Blink Luck my fave. I bloody love singing it. :)

I totally agree about the critical reception for Heaven or Las Vegas and your view on the album, one of my favourites.

I was listening to Las Vegas Or Heaven a couple of weeks ago, I had Ice Blink Luck as a very enjoyable earworm for a while.