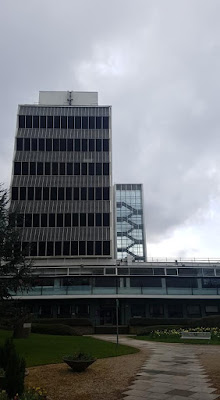 A Certain Ratio's 21st century renaissance continues. Their ACR: EPA 12" came out recently, four songs recorded at the end of the sessions that led to last year's album and the last songs to feature the vocals of Denise Johnson. They've just announced two further EPs, ACR: EPR which promises a further five new songs (grey vinyl and digital, out in August) and ACR: EPC (blue vinyl, out in July). EPC has a version of Music Control, the collaboration with Stretford's Chris Massey and their Sir Horatio alter ego, a tribute to Andrew Weatherall titled The Guv' nor (ACR were one of Weatherall's foremost and guiding influences), the long version of YOYOGRIP and this face off between ACR and The Emperor Machine.

If that doesn't get you up and out of your chair, I don't know what will. Deliberately pushing the Shack Up button with a bassline from their earliest days, ACR and The Emperor Machine (Andrew Meecham) are in full flow with brightly coloured dance funk, laser beams and mirror balls, and that ever present northern noir.

That's made my day already. Big fan of Emperor Machine/Andrew Meecham and, together with ACR, clearly a mtach made in (disco) heaven. Love it!

I have said this on YouTube and the band's Facebook this week...but it deserves another airing.... Emperor Machine is ACR throwing down the gauntlet and daring any other band to come up with a better single this year... I IS FANTASTIC!

What a great time!