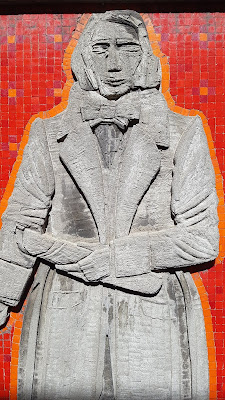 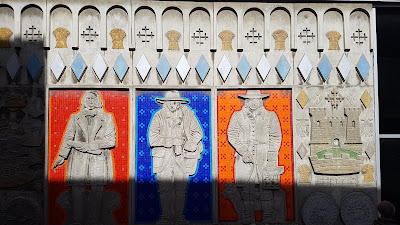 On the side of what used to British Home Stores in Stockport there is a full length set of murals, five concrete panels with tiled pictures illustrating the history of the town, commissioned in 1978. The murals/ mosaics were the work of two designers, Joyce Pallott and Henry Collins. BHS shut down many years ago, the building currently empty and at an unloved end of the Merseyway shopping centre. The panel pictured above, photographed last weekend when the sun came out briefly,  shows Stockport's coat of arms (on the right) and then three figures- from right to left, a Cheshire farmer, Samuel Bamford (radical reformer of the 19th century from Middleton, north Manchester) and Richard Cobden (main picture. Cobden was a Manchester resident, manufacturer and radical MP who stood as candidate for Stockport, a free trade advocate, and anti- Corn Laws, anti- Opium Wars and anti- slavery campaigner). I hope that as Stockport redevelops itself they are not lost- a 2016 campaign to have them listed failed.

One of my favourite albums from 2019 was Calming Signals by Nashville artist Rich Ruth, a marriage of noise and ambient music,-drones, synths and guitars, equal parts crystalline jazz freak out and meditative listening experience. This song, Coming Down, was the opener.

Rich is back with a new album called Where's There Life, six tracks written during the early months of the pandemic. This is the prelude to the album, an instrumental ambient experiment called Goldenrods.

That there is even a chance these could be lost is a travesty. Thanks for the heads up on Rich Ruth.

You'd think losing them would be beyond the realms of possibility wouldn't you.

Thank you for introducing me to this wonderful music,Adam. Just ordered Calming Signals and as Brian said this could be a forgotten gem.