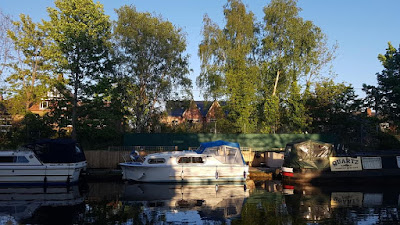 Private Agenda are a two man team split between London and Berlin (Sean Phillips and Martin Aggrowe) who have an extensive back catalogue behind them, their own work, along with numerous remixes and collaborations. Their first full album came out in 2019, an album called Île de Rêve, a dream island which inspired the nine tracks- downtempo, Balearic, ambient music. The album and the rest of their back catalogue is here. Recently a remix package called Submersion came my way- water, islands, the sea, coasts all loom large in Private Agenda's musical headspace. The six remixes are a mini- album in themselves- half an hour of washes of synth, drum pads, half heard vocals, brightly coloured passages and parts where the sound drifts by, repeating piano parts and warm drones- with remixes and reworkings by Coral Sea, JQ, Delac, Delmer Darion, Ocean Moon and this one from Seahawks.

Seahawks are masters of this kind of thing, the point where Balearic and ambient gently bump into each other, with their own recordings dating back to 2010 and the authors of several albums which I've played to death- Paradise Freaks, Escape Hatch and Starways are all recommended. Seahawks remix of Malanai Ascending is a chilled but persistent, slightly psychedelic swim in warm seas, the bass pulsing while waves of sound swoosh by, birdsong, a piano- kaleidoscopic like bright sunlight glinting off the surface of the sea. Buy it digitally or on cassette here.

Another new one to me, this is lush (both sonically and to use a West Country phrase). I didn't want the Seahawks remix to end.

Agreed, it could easily be twice as long and I wouldn't complain.