Are You Ready Now? 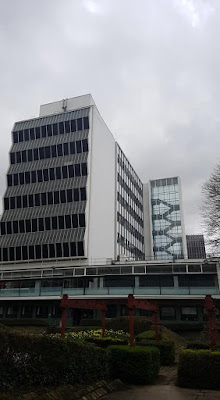 The Woodentops were a great band, a little out of step with the times perhaps which maybe explains why their music still sounds so good today. Their mixture of rockabilly, fast propulsive rhythms (at least partly due to a stand up drummer with hub caps as part of his kit), acoustic guitars being scrubbed at speed, the sweetly sung vocals of Rolo and a generally bright, sunny outlook set them apart from their peers in the indie world. There's some hints of darker influences in their music, Suicide definitely in there somewhere and Rolo served some time in Liverpool post- punk legends The Wild Swans but their songs were usually upbeat, beat music. Why Why Why was adopted by the Balearic DJs, Alfredo and Leo Mas, out in the Mediterranean and then in the club scene back home, an Adrian Sherwood version of the song and then a live version recorded in Los Angeles in 1986 and released a year later on the Live Hypno Beat Live album. This version was from a session recorded for Janice Long at the BBC in 1986.

Why Why Why (Janice Long Session Version)

Great band. But in those less enlightened times they weren't quite indie enough to appeal to ex Smiths fans and slightly too early to get on the indie dance bus. A shame, as the first couple of albums have a lot of good moments.

The first Woodentops record I bought was the Everyday Living double 7" pack, which featured Why as well as the 12" mixes of Move Me and Well Well Well. Even then I knew I had something special, but I have never tired of them since. Both of the time and timeless.