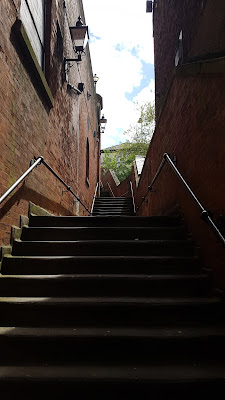 Dub for Tuesday from Yabby You and The Prophets, the flipside to his debut single Conquering Lion. The album, also called Conquering Lion, was released in 1975, widely seen as one of the classics of roots era, with a cast of players including Tommy McCook, Aston Barrett, Earl Chinna Smith and Augustus Pablo. Incredibly Yabby and the band recorded it onto two track- one track for bass and drums and one for organ, with additional instruments dubbed on at Tubby's after. The original album has been re- released this year in expanded form with the original ten cuts and a further twelve dubs and versions. Essential roots reggae, full of the political, righteous and devotional fervour of mid- 70s Jamaica. You can buy the whole thing in a variety of formats here.

Labels: dub, king tubby, yabby you, yabby you and the prophets

I thought long and hard about pre-ordering a copy of the double LP - too long and too hard unfortunately. I missed out :-(

Excellent selection, Adam, any dub day is a good day in my opinion. I was getting into dub in a big way in the late 1980s, but Conquering Lion will (unsurprisingly) always be associated with the mighty Andrew Weatherall and his judicious use of the opening vocal sample in the Boy's Own Mix of That Petrol Emotion's Abandon remix. Speaking of mighty, your post has also prompted to search out my Select Cuts From Blood And Fire CDs as there's a great remix of Conquering Lion by Smith & Mighty, which I haven't listened to in far too long.

And thanks for the link to the Pressure Sounds Bandcamp link, what a feast! Tempted by the Dennis Bovell reissues as well.