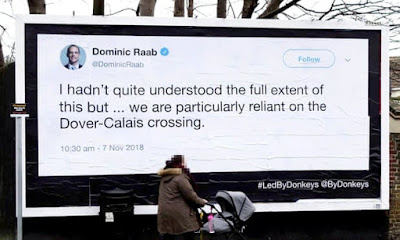 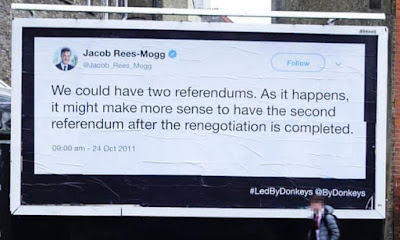 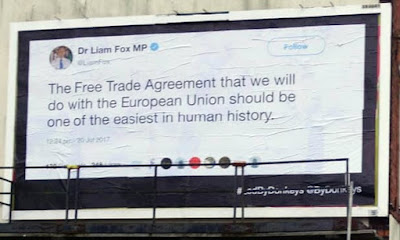 This week Jacob Rees-Mogg suggested that if The House Of Commons continues to make every effort to avoid a no-deal Brexit the Queen should suspend parliament. There you have it, if there was every any doubt, the actual face and voice of a right wing coup, not by thugs in jackboots but by Old Etonians with upper class accents. Suspend democracy to get what you want. 'If Adolf Hitler, flew in today, they'd send a limousine anyway...', as Strummer put it in 1978.

So this is very well timed indeed, a new song from a very post-punk line up of Jah Wobble, Keith Levene, Richard Dudanski, Youth and Mark Stewart and this fantastic musical melting pot, a comment on the madness of Brexit, a piece of 2019 brilliance. Even more excitingly, there's a Weatherall remix to follow. Levene and Wobble's former PiL colleague, Brexit and Trump cheerleader Lydon, is nowhere to be seen.

Interesting seeing the twitter quotes, particularly the Reese-Mogg second referendum quote. I had not seen that before. I had to fact check it, you can't be too careful these days. It's true and unbelievable that politicians can continually contradict and change their statements and positions on brexit, and how facts and history are continually being 'tampered' with. Is it any wonder that the country is going through a national nervous breakdown.
Yes Mr Swiss I too am looking forward to the Weatherall mix of this one, I'm sure you will be the first to it. I hope he leave some of Mark's vocal in.
-S.R.C

Brilliant, in every respect. Thanks SA

My goodness, this is marvellous.

Thank fuck we shall hopefully soon be gone from this shitshow

Glad this song has gone down so well today. I was trying to think of any other cultural/musical responses to Brexit and not finding many. The Good Bad Queen album from last year (which lacked decent tunes to these ears) came to mind. Any others?

Was flipping channels the other night when I was amazed to see The Specials live on The One Show (!!!!!!!) with this fitting song about our full of Brexshit politicians...

It's almost like Part 2 of Ghost Town:
"You're all so drunk on money and power
Inside your Ivory tower
Teaching us not to be smart
Making laws that serve to protect you
But we will never forget that
You tore our families apart..."

Just fantastic! That's the one to beat for me so far this year!