Somewhere Down The Road 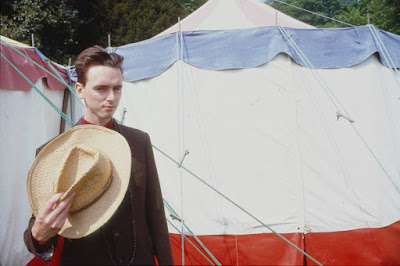 Last week the Madchester Rave On blog posted up a 12" single from May 1991, remixes of The Lilac Time's Dreaming by Creation dance act Hypnotone. I'm not even sure I knew that these remixes existed and if I did I don't think I'd heard them before. Hypnotone had a classic 1990 release on Creation, the magnificent, bleepy Dream Beam and an excellent eponymous album in the same year. They remixed Primal Scream and Sheer Taft. This remix of Dreaming is very 1991 and a very chilled, spaced out affair. The whole 12", with the original song and a different version of the remix was posted by MRO here.

The Lilac Time started out in 1986, an indie/jangle-pop/folk band founded by Stephen Duffy (formerly Stephen Tin Tin Duffy) and his brother Nick who veered from major to indie in the 80s pitching up at Creation around 1990 and being managed by Alan McGee. In 1987 they released a beautiful, jaunty but melancholy single called Return To Yesterday, a song I never seem to get bored of and one I've posted before.

The lyrics, written over 30 years ago now, seem to take on a new meaning in the light of our current political situation.


'It was the day before the day before yesterday
When we thought everything would now go our way
We inherited a fortune of innocence
And they took it all away
We travel on the last bus from sanity
Through province town to cities of obscurity
And somewhere down the road it occurs to me
That I might have missed my stop
But I will not return to yesterday
Or smooth out the human clay
We'll face this new England like we always have
In a fury of denial
We'll go out dancing on the tiles
Help me down, but don't take me back
I heard a lover calling to Saint Anthony
Sadly treating love like her property
Only battles can be lost and so it seems we do
But I'm hoping for a change
I left you at the bus stop in working town
Now the service has been cut re-named slumber down
I can see you on the bars of your brother's bicycle
Now I hope you're not alone
And all the politician creeps
I know they want them back
And the couturier weeps
She knows they won't come back
And the lovers who seldom speak
I know they want them back
And me falling back into your half term kisses
No I will not'
Duffy seems to be writing about loss of childhood and how the future isn't what it was promised to be, that adult life is emptier than it seemed as a child. I can't help but feel Duffy is coming out against nostalgia here, he isn't wanting to go back to childhood or teenage years, despite the lure of the half term kisses, but something has been lost.
Both sides of the Brexit argument could fit in to this, the Leavers who want to return to the mythical England of their imagination and the Remainers who feel they've been betrayed, sold out and ignored and who suddenly in 2016 found themselves in a country they didn't recognise. The chorus- ''we'll face this new England like we always have/in a fury of denial, we'll go out dancing on the tiles''- speaks for itself.

I love that remix, far superior to the original. Had never heard it before cheers