Get Ready To Go 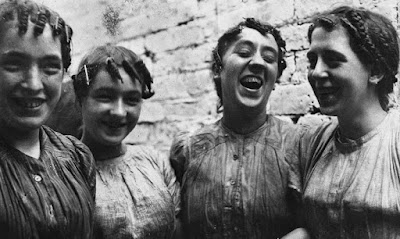 This photograph did the rounds on Twitter before Christmas (I think I found it via Dave Haslam but initially it came from The National Archives). It shows four Manchester mill workers in 1905. Our view of mill workers in the Victorian/Edwardian period is that life and work must have been unremittingly grim but these four young women seem very relaxed in front of the camera and have found something to laugh about. The faces could have been pictured yesterday in many ways, they don't seem to be specifically pinned down to one hundred and four years ago (apart from the condition of their teeth, showing dentistry was a luxury many could not afford in a pre-NHS Britain). The tight curls in the hair are interesting- I wondered if it was to keep it tied up and out of the way of machinery that could easily have scalped them if a strand got caught but Mrs Bagging Area suggested that it could have been a way to get curls, which then suggests that this was done prior to a night out. It throws up lots of aspects to ponder but ultimately what a great snapshot of the lives of people in early 20th century Manchester.

Not linked to the picture in any way other than I read a reference to it recently and I could imagine the four above getting down to this song if they'd been born several decades later and were into 80s post-punk. APB were a fourpiece from rural Aberdeenshire, Scotland and inspired by DIY and the sound of groups such as Liquid Liquid they made this song, released in 1981 on Aberdeen's Oily record label. The bassline alone is worth the price of admission, never mind the slashing guitar chords and totally on it disco-punk drums.

Although the band didn't know it copies of Shoot You Down made their way to New York where they found a home on the floor of NYC's best clubs, places like Danceteria, which is where circa 1983 Beastie Boys heard it, danced to it, and then wrote about it in their new book.

Yes a wonderful photo and yes by our comparisons their lives must have been grim, but their moments of rest, brief as they were, must have been all the more joyous. Indeed a move from the fields to the factories was considered an improvement back then! Hat's off to our forebears. I am always amazed by their endurance and fortitude.
I am also reminded of that great Magazine track 'Model Worker', and Devoto's blinding line 'I'm sick and tired of working on the land, I want to work with machines and look handsome'.
-S.R.C

Not about the great picture or APB... but your mention of Oily records sparked a memory - sure enough I have a 7" on what I presume is the same label. It is "Parades" by The Squibs from 1980, probably bought because I heard it on Peel at the time but I know no more about them.

Although now I know Oily was Aberdeen based, maybe The Squibs were Scottish. Any ideas?

Fascinating photo and a great conversation starter in this household. Looks like the gang is on their way to the Hacienda to see a double bill of Stockholm Monsters and Crispy Ambulance.

SRC- yes indeed, hat's off to them all. Working in the cities in factories guaranteed a weekly wage too, a less precarious existence than farm work.

Phil- sorry, I don't think I know anything about the Squibs. There are plenty of Scottish indie fans out there who should be able to contribute though.

Brian- a double bill I'd pay good money for now too.

SA - you are so right. In NYC, APB was absolutely huge in the clubs! They slotted right in with the Fractured Funk sounds and very early Electro filling dance floors all over the city. Between 83 and 86 I think my friends and I saw APB play 9 times - in clubs, venues and even a couple University Auditoriums. They packed every place they played.

You bastard.....I've a post in the offing on this very same song, inspired by catching mention of it is the BB book.

They seemingly came to prominence via a Radio One 'Battle of the Bands' contest. The single in Phil's collection is the sophomore effort. It's a pity he doesn't have 'On The Line' the debut and indeed the first single on Oily Records. It was restricted to a pressing of 1,000 copies and the only one for sale on Discogs just now is looking for £70.

You should do your post anyway JC. You'll have readers who don't come here and something different to say about it.


Thanks for the info on The Squibs, JC!