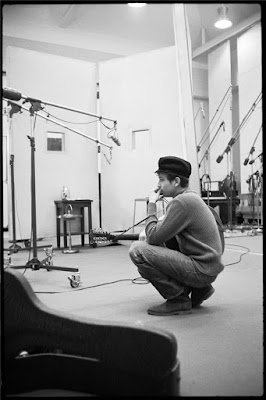 One of the things I like about blogging is that you can chuck in a curveball with no build up, lead in or preparation. After a week of ambient, electronic, early Balearic, early 90s dance remixes and B-sides and 21st century techno/house, today I'm offering you a Bob Dylan song from 1961.

Nearly 60 years ago Bob Dylan was a kid in Greenwich Village, an up and coming folk singer with a corduroy cap, a guitar and harmonica and a deal with CBS. As Bob says at the start of the song, he learned it from Ric von Schmidt, but it was also played by Dave van Ronk, who may have learned it from Rev. Gary Davis. There's something about the guitar picking, the rhythm and Dylan's vocal that makes it just right for Sunday morning.
Posted by Swiss Adam at 08:00

Great to see some love for His Bobness on a Sunday morning.

Why can I not read "Rev. Gary Davis" without thinking "ooh, Gary"?

This is still one of my favourites, not just from his first album, but from his entire oeuvre.

It's great to see it posted in our neighbourhood.