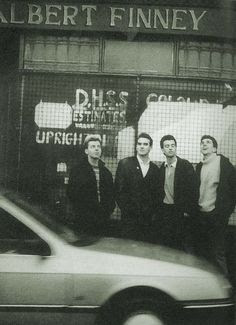 The Top Of The Pops repeats are up to 1987 now which is making for some pretty awful episodes. Last week though the run of bands to keep your finger on the fast forward button came to an abrupt halt with The Smiths in all their glory miming to Shoplifters Of The World Unite (the episode was first broadcast on February 5th 1987).

The Smiths wouldn't survive 1987, splitting up in the summer after Marr took a holiday, but they sound imperious on Shoplifters. The slow T-Rex riff, the swampy groove and Marr's guitar solo sounded wonderful back then (and still do now). We're going to have to leave to one side everything Morrissey has said in the 21st century and concentrate on his performance here- the double denim and Elvis/Smiths T-shirt, his gyrating dance- unique and then some. His lyrics for Shoplifters are something else too. No one else would have or could have written these words (or borrowed them from other sources and stitched them together). The final verse for example...

This is the instrumental demo version from that Smiths bootleg that regularly does the rounds on the internet.

In April they were back on Top Of Pops with another non-album single, Sheila Take A Bow. They also travelled up to Newcastle to perform Sheila and Shoplifters live on The Tube (and it turned out to be the last time they'd play in front of any audience). The idea that something like this could be broadcast on Friday at teatime seems incredible now. Truly, they were different times....

Sheila and the Shoplifters - perfect name for a Smiths tribute band.

Peerless, then and now. Just doesn't get much better.

Also loving Johnny's Gibson 330 12-string in that Tube clip. If this is to believed (and I've ID'ed it correctly) that guitar once belonged to Pete Townshend.

Can we just have a 20th and 21st century Morrissey seems ignore the latter please?!! In was 12 at the time and the Shoplifters performance left me a bit confused but thankfully a few years later it all clicked into place.

Christ, I have big fingers!

Nice guitar research Martin.
I know what you meant despite your fingers Michael.