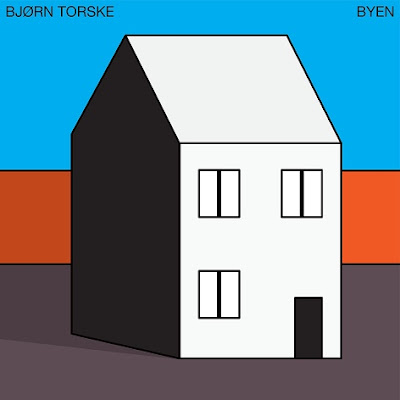 Every year I buy an album right at the end of the year, from that year, that then becomes one of my favourites of that year (but too late for the end of year lists). This year it was Bjorn Torske's album Byen, bought almost on a whim in Piccadilly Records a few days ago. I bought it because I had some Christmas money to spend, I have of his older work, am currently in a Scandi-house phase and I liked the sleeve.

Byen is super sleek space disco- the driving basslines are smooth, the synths are cosmic, the percussion and drums are crisp and made for the floor, and everything has a lovely sheen. Opening track First Movement starts with waves crashing and seagulls calling, long descending synth chords and then some congas come in to nudge things forward. From track two, Clean Air, the synth and piano lines begin to rise and while there's no great hurry or urgency the tempos increase to clubbing speed. There are deep house grooves married with reflective moments. Gata adds some magical guitar chords to the mix and a male voice choir chanting over the Italo grooves. On side four the eleven minute long track Night Call is a chunky Scandi-disco centrepiece, the sort of track that should lead you into a New Year. Really lovely stuff for mid-winter. Try these two.