The Right Is Ours, We'll Take The Chance 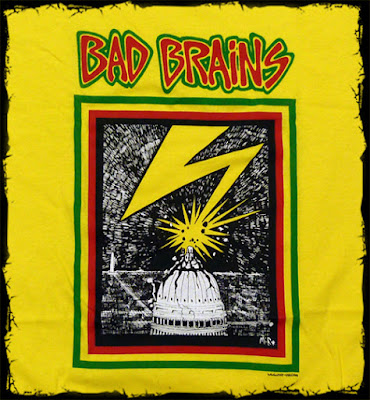 Bad Brains were four Rastafarians who started out under a different name (Mind Power) in the mid 70s as a jazz-fusion band who were broadsided by punk. In 1979 they recorded their debut single (released in 1980 and almost single-handedly inspiring the US hardcore scene), one minute and twenty-nine seconds of fast, loud, furious Washington D.C. punk.

The chorus, as far as I can tell, goes like this (if it is the chorus, it only happens once)-

'I come to know now with dismay
That in this world we all must pay
Pay to write, pay to play
Pay to come, pay to fight'

'And so it's now we choose to fight
To stick up for our bloody right
The right to sing, the right to dance
The right is ours, we'll take the chance

There's a lot in there for something that only lasts roughly ninety seconds. They were banned from playing in D.C. and moved to New York. Over they years they also recorded as a reggae band (and often brought funk, soul, hip hop and heavy metal into their sound) also splitting up and reforming with different line ups several times. I used to have a cassette with this as the opening song and it always seems to me that it is perfectly suited to being track 1 side 1 of a C90 tape.

Saw Bad Brains at CBGB's back in 81 or 82. If I was ever at a more high energy show since then I can't remember it.

I was going to write a line that said something similar- 'if anyone hears a faster, louder angrier record today please let me know' sort of comment.

Just looked at prices for the 7" on Discogs.

I didn’t discover Bad Brains until Quickness in 1989, but I quickly learned I had missed out on something special.

Read loads about this band over the years...never really been inclined to follow things up. The younger me wouldn't really have liked this 45....but my tastes have matured somewhat. Cheers!!!!