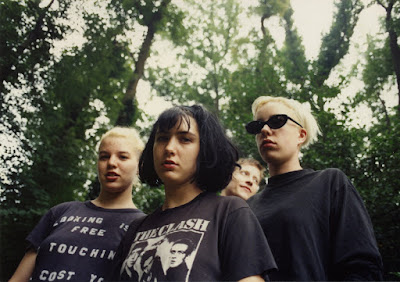 Riot Grrrl got fairly short shrift in the UK music press in the early 90s but the feminist ideas it espoused are widely accepted as the norm now, especially in the wake of #MeToo, as is its punk rock spirit, music and politics. Bikini Kill were Riot Grrrl's leading band. They formed in Olympia, Washington in 1990 and released three albums and a bunch of singles before splitting in 1997. Their album titles give a good idea of where they were at- Revolution Girl Style Now! in 1991, Pussy Whipped (1993) and 1996's Reject All American. Their singles compilation from 1998 is a good place to start. They've just announced a reformation and have gigs planned for the US. This 1995 single is a righteous blast of mid 90s feminist indie-punk.

Vocalist Kathleen Hanna uses the song's two minutes sixteen seconds to vent some anger, ask and answer some questions and declare herself in favour of fun (something Riot Grrrl was accused of being against). 'Do you believe there's anything beyond the troll-guy reality?' she asks, replying 'I do, I do, I do'. Hanna goes on to address rape and body image issues, switching voices in her vocal style between American girl and Riot Grrrl. She demands action and strategy ('I want it now') before declaring herself in favour of sex and fun and the right to do what she wants- 'I believe in the radical possibilities of pleasure babe'.

Cos we didn't invent it....and the UK music scene at the time was ridiculously misogynist.

That's you had more original thoughts and musings at your place in a week than I've managed in six months. I feel inadequate.....

Thanks. Not sure how many of my thoughts are original tbh JC. Most are probably pinched subconsciously from other people.