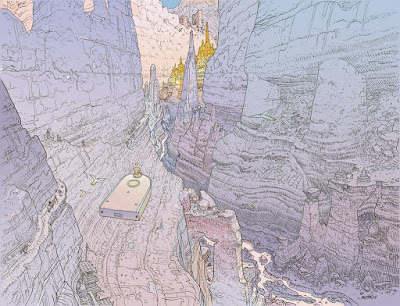 I last posted this song three years ago in January 2016 and it's fair to say a lot has happened since then. Theresa May stumbles on, unable to act, held hostage by her own red lines, her own party and the wingnuts and closet racists of the right wing, and her deal with the DUP. A government that can't deliver whatever it was the 52% imagined they were voting for. The vox pop sections of TV news and the papers are currently full of people saying they want it over, they want out and they're happy with a hard Brexit so 'we' can get back to being 'great' again (never mind the fact that almost everyone who uses that phrase seems to think that the word Great in Great Britain means amazing or powerful and isn't actually just a geographical term to describe a landmass containing England, Scotland and Wales). Many of these people seem to have an unlived, deluded nostalgia for a England of the early 1950s, a post-Dunkirk and World War II but pre-Suez Crisis country, with an Empire overseas, where the milkman came every morning whistling as he left glass bottles on doorsteps, the birds chirruped in the trees and you could get an appointment at the doctor's the same day (and there weren't any people with darker skins or eastern European accents living down the road). I fear we are heading for a No Deal Brexit and that there are plenty of people happily welcoming this, all of whom are also suddenly experts on WTO rules and tariffs. How leaving the E.U. is going to achieve this is unclear to me. From where I'm sitting, it looks like a total disaster, for all of us. People that want to live in the past usually get stuck there. Does any other nation other than the English have such an obsession with its past, a past that never really existed? The only faint glimmer of hope is that the Tory Party will have to own this fuck up forever (and if this whole debacle led to the break up of the United Kingdom, that would be an even sweeter irony).

Back to the song and a total change of mood. St Etienne's third single was Nothing Can Stop Us, an uptempo slice of indie/dance/northern based around a Dusty Springfield sample and the then new vocalist Sarah Cracknell. The single was a double A-side, the flip being Speedwell, a chunkier, deeper, house influenced tune. The 12" single was followed up by second 12", released a week later, with two remixes of Speedwell and an instrumental version of Nothing Can Stop Us. The remixes of Speedwell were by Dean Thatcher and Jagz Kooner, as The Aloof, and are superb. Totally 91.

An excellent rant there Adam

Sadly I can't argue that your wrong on any of that apart from Corbyn needs to own some of this shitshow too. We have a fair few nutters living in the past unfortunately up here too but even worse they get their sense of perspective from a factually inaccurate film made by an anti-semitic Australian who a long time ago made a couple of very good films

I watched Sky News yesterday and for the first time I saw a debate in your House of Commons, the one held directly before the vote of no confidence. Jesus Christ: it's quieter and more civilized in every bloody German Pub on carnival's Monday! Honestly, I was waiting all the time that some chap enters the room with a big plate and offers a pint or two to the MPs ... would have been suitable, I think!

But the best thing was when the bloke in the big chair suddenly starting yelling at the others right at the end, unbelievable! I looked at Mrs Loser and said: 'Well, I think that's it, that was the vote.' She looked at me and said: 'You don't want to tell me that those who shout loudest "Yeah" or "No" win?'. And I really thought I war right, turned out I wasn't, but it wouldn't have surprised me a great deal if I HAD been right!

Which, I think, says it all about the state Great Britain is in these days. Get your act together. Now!

Excellent rant and excellent song. That ridiculous misuse of the word 'Great' in GB *really* winds me up. The ignorant arrogant fucks.

Corbyn's policy (as a secret leaver who has fudged the whole issue for 2 years to try to keep Labour leavers and remainers on board) is a joke and I think history and the voters will judge Labour harshly for this. They're enabling Brexit when as the opposition they should be doing their job- oppose it. Considering Corbyn likes to put it out there that he's always been a man of principle he's been remarkably quick to play politics over Brexit (and his supporters like to say he's always been on the right side of history- not this time). What has really pissed me off is being told that 85% of the electorate in 2017 voted for parties who want Brexit. If that's how I'm being painted I won't be voting Labour next time.

I can't see his long game working either- their line is to push for a General Election. In which world is Labour led by Corbyn going to win the next GE? There's no evidence at all that Labour will win a GE. They can't get ahead of the worst government in British history in any polling I've seen.

Yes, what a balls up. How ironic that all the main brexit areas, the NE, the SW and Wales all received huge amounts of EU regeneration money and foreign business investment encouraged by the EU. Talk about shooting yourself in the foot.
All the regressive popularism that fed into the immigration debate. Did they not realise half of the immigration to the UK comes from outside the EU, which government has control over. The whole thing was a balls up and misadventure led by confidence men. Who'd have thought a whole country could be hoodwinked (I just remembered the USA too, ha).
Brexit, if you got sold one of these you should be able to ask for your money back. Perhaps only another balls up (failure of processes in parliament) can save us and we could remain in the european trading block with open borders and open hearts.
-S.R.C (Socialist Republic of Canterbury)

Loved that Dirk, "the bloke in the big chair" made me smile. It's a fucking kindergarten, full of upper class twats, and those who wish to be upper class and a few normal people (about a third of them) trying to do the best they can for their constituencies

Adam.....I can only but applaud your posting.

A perfect and succinct summary of what's happening and I'm entirely in tune with your own feelings on the matter.

As someone who has been involved in, or part of, politics for my entire adult life, I am embarassed and ashamed of everyone's behaviour over Brexit. Nobody is doing the right thing....it's all naked and shameless protection of self-interests.