Down the road from here at Broadheath, behind the retail park, they're building a load of new houses. This involves demolishing some Victorian factory/industrial units, which if nothing else provides me with some photographic content. The beautiful linotype works (pictured below in sunnier days) seems to be protected from destruction I'm pleased to see- it's currently covered in scaffolding and plastic sheets. I'm guessing it's being converted into flats. 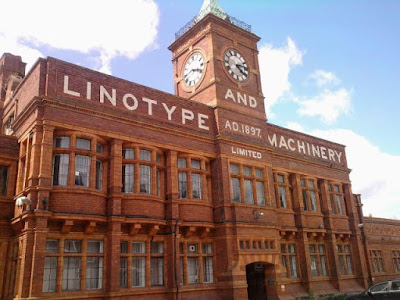 I'm hopping back to Thursday's post musically and an early St Etienne B-side that I'm enjoying again. Filthy was the other side of the Only Love Can break Your Heart single, their debut, and has a deliciously murky sampled wah-wah guitar part and a rap from the then teenage Q-Tee. Everything, from the drums up, is drenched in reverb.

The other version of Filthy which has appeared on various compilations and 12" singles is a dubbed out version, Pete and Bob going mad with the echo unit.

Fantastic post, SA. Right up my alley both musically and pictorially. Love the dubbed out version especially, which I hadn't come across before. Top building so full of character in its neglected state like that. Would be interested to know what becomes of the Linotype works, I really hope they keep the lettering and the clock intact.

Yeah, if the lettering and clock don't survive it'd be a tragedy.

Love this so much, had the Only Live...CD single. I only discovered the Studio version about a month ago. Q Tee appeared on that Mark Radcliffe C4 music show The White Room but I've no idea what the track was, just that it was a great track.