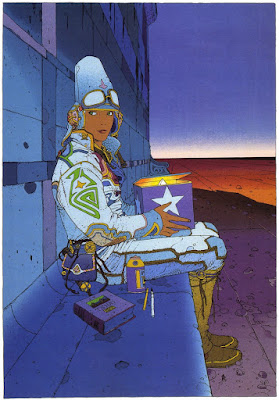 This Monday's long song is an seven minute meditation from Newcastle's Steven Legget, a slow moving, elegiac tribute to a Turkish bath at Newcastle's City Pool built around cello and waves of electronics. The album this track is from, Bathhouse, also takes field recordings from Crete and uses them to construct luscious ambient music. It has long since sold out on vinyl but is available digitally from Bandcamp. To be honest, at just under seven minutes this track isn't nearly long enough- it could be twice the length and I'd happily let it wash over me.

French artist Moebius (Jean Giraud) brought a distinctly European sensibility to comics, a semi-surreal style that was a world away from the Wham! Pow! Blam! world of Marvel and D.C. His comic art is wildly imaginative and the colours shimmer, the people seem real but other and the worlds and places he drew became a standard for sci fi films. He grew up watching and reading Westerns and was inspired by the endless skies of the Mexican desert (having lived there briefly with his mother in 1956). Between 1984 and 1986 he drew The Fantastic Four and Silver Surfer for Marvel, bringing his European bandes dessinees style to superheroes. If any Marvel comic was going to fit with Moebius, it was Silver Surfer. 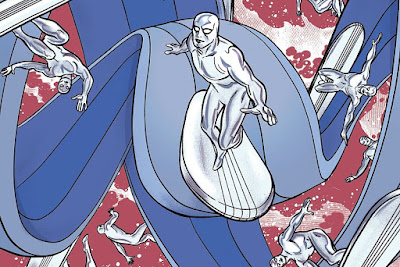 Starwatcher (pictured at the top of this post) was an androgynous stargazer in a trippy, hypnotic world and is Moebius' career high. Published in French in 1986 and long out of print- a second-hand copy will set you back a couple of hundred quid. Moebius' Starwatcher and his artwork generally is perfectly suited to today's ambient sounds.

Well this is rather lovely.

That is great SA. you are right, it is far too short

Hey, thanks great recommendation, I got the album yesterday following hearing the track on your blog, made my life a little bit better.

One more inspiration for me Adam. Thank a lot to you for introducing me to very good new music during the last years. Hope ManU will get the turn around very soon.

United have already turned it around Walter- Ole is the answer.